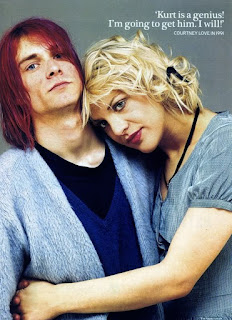 10 random facts about Cobain and Nirvana

2. Years before they met, Kurt and Courtney did the same drugs.
In 1974, second grader Kurt was prescribed Ritalin to curb hyperactive behavior. Courtney Love was also given Ritalin and later reflected that this contributed to the couple’s eventual heroin problems: “When you’re a kid and you get this drug that makes you feel that feeling, where else are you going to turn when you’re an adult?”

3. At church, Kurt found God — and Krist Novoselic.
On Wednesday nights, Kurt went to Christian Youth Group, where he befriended 19-year-old Krist Novoselic, whom he’d first met in high school. They started covering Led Zeppelin songs together. Kurt was baptized and, according to youth counselor Dave Reed, “accepted Jesus Christ into his life,” but his religious fervor soon waned.

4. Kurt saved people’s lives. When he wasn’t mopping toilets.
In May 1985, Cobain started work as a janitor and — in the case of staff shortage — a substitute lifeguard at the local YMCA. One night that summer, he graffiti’d the YMCA building. Kurt didn’t seem to realize that as janitor his first assignment the next day would be to clean it up.

5. He nearly joined the navy.
In 1984, Don Cobain asked a navy recruitment officer to speak to his son. Kurt listened but didn’t follow up until a year later, when his friend Trevor Briggs enlisted. Kurt took the aptitude test and passed it, but pulled out at the last minute.

6. Being a Cobain pet was high risk.
In 1981, Kurt killed a cat by trapping it inside his parents’ chimney. Five years later he accidentally stepped on the head of his pet rat, Kitty, and was forced to beat it to death with a plank. In 1991, Kurt dyed his kitten, Quisp, red, white and blue with Kool Aid — then watched it have sex with his pet rabbit Stew.

7. A chainsaw helped form Nirvana…
In 1986, Cobain formed the Sellouts, a Creedence Clearwater Revival tribute band. He played drums, Novoselic played guitar and pal Steve “Instant” Newman played bass. Newman quit when he lost his fingers in a gruesome logging accident. After recruiting drummer Aaron Burckhard and swapping instruments, the band evolved through names like Skid Row, Ted Ed Fred, Throat Oyster and finally Nirvana. Said Cobain, “I wanted to put out a record or play some shows instead of having it all fall apart like everything else for the past six years.

8. …and so did Springsteen.
Burckhard left the band in 1987 after he got busted for driving drunk in Kurt’s car. He was pulled over by a cop named Springsteen and proceeded to abuse the cop with cries of “Hey Bruce! What’s up Bruce!” The police impounded the car, and Kurt fired Burckhard from the drum stool.

9. At first, only furniture thought Nirvana were cool.
One of Nirvana’s first shows was booked at Seattle’s Central Tavern early in 1988. However, the attendance clocked in at an underwhelming zero. Cobain disappointed the expectant chairs and tables. “We loaded up our stuff and left,” he recalled.

10. Cobain painted on the side. And jizzed on his work.
In 1989, Kurt’s neighbor Amy Moon visited his apartment to commission a painting. Cobain told her that once a piece was finished he would add his “secret ingredient.” “My seed is on this painting! Look, you can see how it glistens,” he announced to her.